We at IconWines.ca love sports and silly wordplay almost as much as we love wine. On the heels of last year's epic World Cup of Wine, we bring you March Meritage! in honor of the US collegiate hoops tournament beginning soon. Fill-out the bracket below and score along at home. 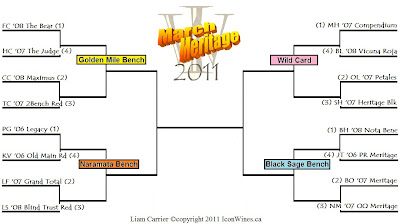 The wines in competition are all from BC and are Meritage by nature if not by name. These fine blends of Bordeaux varietals range from cellar-dwellers to super-sippers and everything in between. Price-point was capped at $55 to make the competition easier to follow at home. Results will be posted from March 15th through April 4th.

Round 4
Championship: Fairview VS Black Hills