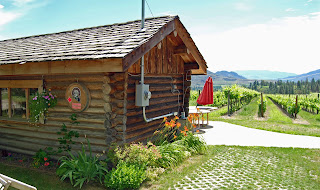 Fairview Cellars is located on the Golden Mile Bench just outside the town of Oliver, BC. Diehard fans of the wines produced by winemaker and proprietor Bill Eggert know that the best way to go about procuring his coveted product is to visit in-person for the full experience. Eggert is one of the most personable (and knowledgeable) characters in the BC wine industry. The quintessential farmer-turned-winemaker who understands that great wines come from great terroir and careful vineyard management. His 6 acre home vineyard has long been a bastion of ripening Cabernet Sauvignon which forms the core component of his top Meritage blends. Through new vineyard expansions (both purchases and partnerships) Fairview Cellars is beginning to expand its portfolio of wines and volume of cases produced.

On October 3rd, I had the pleasure of tasting a few of the upcoming releases and barrel sampled new additions to the Fairview Cellars line-up.

2008 Premier Series "The Bear" - $35
The latest release of Fairview Cellar's flagship Meritage blend is available now in the tasting room. Always a wine to buy and hold (or collect as many do). The 2008 vintage continues the house style of a big, bold, complex and compelling Bordeaux-inspired blend of Cabernet Sauvignon, Merlot and Cabernet Franc.
Full Review and Icon Score Coming Soon

2008 Madcap Red - $27
The new Madcap, Bill's Merlot-heavy Meritage blend, should be released November-ish, but has no firm date as of yet. Always the red wine of the line-up that is the most approachable in its youth. Big dark-fruit flavours and tasty, round tannins.
Icon Score

2008 Premier Series Iconoclast - $120
Starting with the 2008 vintage, Bill has selected his best barrel of Cabernet Sauvignon and treated it to 100% new French oak. Smoother, rounder and more feminine than the standard Cab. Very limited release available only in the tasting room.

"The Wrath" - Release date TBD - $60 (estimated)
This will be a new wine in the line-up to be released some time in 2011. The fruit for this 100% Cabernet Sauvignon wine comes from a Golden Mile Bench property that Eggert has been cultivating for 5 years. The "Wrath" is a nod to the "Grapes of Wrath" and the hardship it suggests in getting the new vineyard site to the point where it will produce quality fruit (or any fruit at all). It could also refer to the "The Wrath of God" due to the seemingly spiteful nature of Bill's run of bad-luck with the site (feasting dear and wrathful hail). 2009 produced the first serviceable crop from the site and the timing couldn't have been better. The combination of the hot season and the vineyard site has produced the ripest Cabernet Sauvignon I have ever tasted in BC. The barrel sample reminded me of a Napa Valley Cab. I look forward to trying it again once it's ready for release. Keep an eye out for this one!

We also tasted barrel samples of Cabernet Sauvignon that will go into the 2009 Bear and Iconoclast. Wow. I'll reserve final judgment until I taste the finished product next year, but early samples suggest that 2009 may be a vintage for the ages if you are a fan of big, ripe Cabernet Sauvignon-based red blends.