Quick pop quiz! Name a top-end BC wine that has been made continuously for 10 years... yep, there are but a handful. Mission Hill's Oculus, Blue Mountain's Pinot Noir and Black Hills' Nota Bene are the only reds that come to mind. Why? For one, the premium wine industry in BC is still very young. Sure, we've been making wine in BC for decades, but premium, cellar-worthy wines have only been produced in the Province since the mid 90's.

Arguably, of those few, no other wine has had more effect on the collectability of BC wines over the past decade than Nota Bene. Thus forever altering why we add BC wines to our cellars. Gone are the days when we added BC wines to our cellars simply to see how they would perform with extra time in the bottle. Now, a growing percentage of the wine-buying population, add these elite, Iconic wines to their cellars for equal parts status and drinking enjoyment. So, how do they fare over time?

I had the opportunity to attend a recent 10-year vertical tasting of Nota Bene at Black Hills Estate Winery - a virtual time-capsule of Okanagan Valley vintages from 1999 to 2008. Except for the first year, the wine has changed the percentage of its components only minimally from vintage to vintage reflecting the medley of varietals planted in the estate vineyard. This "field blend" approach has its challenges, but certainly allows the terroir show through and reflects vintage variation.

The tasting was hosted by winery president Glenn Fawcett who clearly understands the power of the Nota Bene brand and has changed very little around its production since taking over the firm in 2006, except to fund upgrades in winery equipment. These improvements on the winery floor and in the cellar will effect quality more than character and will mean the Nota Bene of tomorrow should out-live the Nota Bene of the past - depending on the vintage conditions. 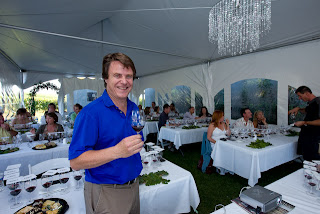 The wines were poured from standard 750ml bottles for the vertical tasting. However, a later event afforded the opportunity to taste a few of the vintages in double-magnum format (3L bottles). Notes on the double-magnums when applicable.

Double-Magnum: Much more lively. More prominent red fruits on the nose. Has peaked and is drinking beautifully now. Drink 2010-2012.

Double-Magnum: As with the 1999, the large format bottle has allowed the wine to age more slowly and the "old wine" characters are charming rather than a burden. Has peaked and is drinking beautifully now. Drink 2010-2012.

2004
2800 cases. 46% Cabernet Sauvignon, 36% Merlot, 18% Cabernet Franc.
The 2004 was the stand-out for me at the tasting. Pinot Noir in appearance only with a crystal clear, light-garnet colour. Elegant nose of red fruits, licorice, chocolate and minerality. Crisp and vibrant on the palate. Drinking beautifully now and will likely peak in another year. Drink 2011-2014.

Double-Magnum: Tasted fresh, juicy and vibrant like it had just been released. Drink 2014+.

Double-Magnum: (Tasted at the BC VQA trade show) Tasted like it was right out of the barrel. Fresh and vibrant. Large format bottles of the 2008 will increase the lifespan of this release, however, I would still recommend enjoying this vintage sooner than the 2005-07's. Drink 2013-2016.

2009
3300 cases produced. 46% Cabernet Sauvignon, 38% Merlot and 16% Cabernet Franc.
Not yet released and only recently bottled, the 2009 vintage was poured as a barrel sample to preview the upcoming release (est. June 2011). Having tasted many 2009 barrel samples lately I am very excited about this vintage and the Nota Bene is no exception. Production is down due to crop damage in the spring of 2009, but a hot summer and dry Fall has produced big fruit flavours and ripe tannins (ripest in years).
Icon Score