The World Cup of Wine - U20 Division 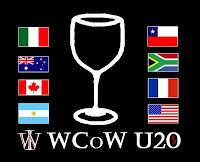 Due to the current economic conditions, the inaugural Word Cup of Wine will be limited to 8 countries:
Argentina, Australia, Canada, Chile, France, Italy, South Africa, USA.
The Rules:

3. The 100 point scale will be used to score the Head-to-Head battles.

4. The World Cup of Wine “Finals” will be contested in June 2010 and will consist of two pools that have been randomly drawn:

1. Team Managers will be responsible for selecting the wines for the participating countries.

2. Each Team Manager may hold regional and national tryouts in order to pick the strongest competitors for each country.

3. Team Managers will be allowed to enlist the help of specialists and of the general public to make their team selections.