Colmar was founded in the 9th century but its physical allure is rooted in its well-preserved 17th century architecture, a preservation due to the town’s remarkable ability to have avoided major damage during the French Revolution and other wars through the centuries. This has made Colmar’s old town a Mecca for tourists. Be sure to try out your French (or German) to begin a conversation with the locals who mange the town’s many shops, as this will unlock the natural charisma the French possess. You’ll get brownie points for the effort, even if they respond to you in English. In one such exchange with a friendly French-only speaking wine shop owner, my wife and I were introduced to a small producer we’d never heard of whose grapes nonetheless came from a Grand Cru level vineyard near Riquewihr. We might never have found this vintner had we not approached the shopkeeper with our broken French. Courage! Toujours Courage! 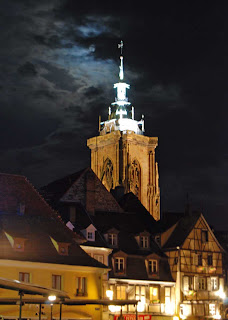 There are beautiful canals that circle the old town area and form districts within; all are worth exploring. The very centre of the old town is where you will find the greatest concentration of restaurants and shops that feature wines, cheeses and various regional charcuteries. There was even a mini “super-store” grocer that had an impressive selection of wines at very approachable prices. I picked up a Grand Vin du Sauternes for next to nothing.

Should you not have the time or resources to visit each producer’s tasting room or village then ordering wine by-the-glass in a Colmar pub or restaurant is a great way to sample the best the region has to offer. Each establishment that we visited had an impressive wine list that was not limited to Alsace or even French wines. However, there is something very satisfying about drinking a famous region’s wines in that region! 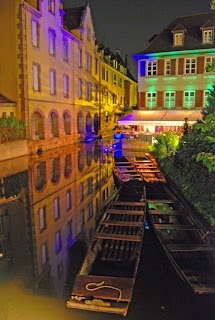 As our evening turned into night, the lights of the city came alive, allowing us to appreciate the effort the city has made to highlight their well-preserved buildings. The prominent steeple of Église Saint-Martin can be seen pointing to the sky, and the canals are treated to a light show worthy of a theme park without the kitsch (or animatronics figures). The old town has a bustling nightlife that never feels primitive or immature; it has a sense of sophisticated inebriation. That is not to say the town doesn’t have a few pubs that cater to the younger, louder, non-traditional crowd, but these are fun to visit as well, only adding to the balance of nightlife that keeps the town from being pompous and boring.

Our weekend trip in Alsace ended the following day with a swift drive north and back over the Rhine to Germany where I was to return to work in Heidelberg and my wife to Vancouver. Our trunk, while not full, was definitely enhanced with Alsace wine, ready to bring back home to our cellar. There the bottles now sit, perhaps waiting to be introduced to an unsuspecting wine novice invited over for dinner, convinced that they just don’t have the palate for wine….If they only knew what was waiting for them! - LC