My love affair with wine began 8 years ago much like my first foray into the world of dating; out of curiosity. What was all the fuss about? Well, after your first great kiss, you’re hooked.

Sometimes it takes a few tries; finding the right partner, because it’s not just any kiss that hooks you for life, but rather it’s that first knock-your-socks-off, time-stands-still kiss when you realize just what the fuss is all about.

The same goes for wine; it was not my first glass of mass-produced California “Chablis” at my uncle’s wedding when I was 20 that got me hooked on wine. That came 5 years later at a quiet dinner party amongst my mother’s friends in the form of a fine Alsace Riesling matched with spicy Thai food that awakened my curiosity. From that point on, I gradually sought out more challenging wines for my late-blooming palate and thus began my life-long love-affair with the noble nectar.

Today, my tastes range from old ports to Nouveau Beaujolais but the “gateway” wine that started my addiction, the white wines of Alsace, remains a sentimental favourite. How fitting then, that my first visit to the wine regions of France would be a weekend trip across the upper Rhine River from southern Germany into Alsace. 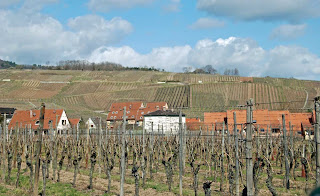 Driving into Alsace in the modern EU is far from ceremonial. A small plaque on the bridge we were traversing which spans the Rhine is the only sign that you have left Germany and entered its neighboring country; France. The only difference noted by my wife, the main driver in our relationship, was the existence of speed limits posted on the highway (the pleasures of driving in Germany deserve their own article).

The similarities of Alsace to that of southwestern Germany are due to a long history of the region having passed back and forth between the French and Germans. You will hear both languages spoken in the small villages around the valley, along with English in some of the higher tourist traffic areas. The wines, however, are far from similar despite the use of the same varietals.
On the German side of the Rhine you will easily find sweeter and lower-alcohol content whites. In Alsace the whites are dryer and more complex. For me, this complexity and the abundance of fruit aromas make the drinking of an Alsatian wine a very different experience from that of its German counterpart. - LC