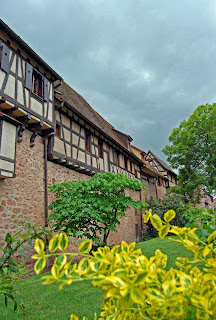 Our first stop in Alsace was the little town of Riquewihr; resting comfortably in the foothills of the Vosges Mountains, watched intensely from above by a medieval castle. The beautiful mountain range lining the valley acts as the backflow of a crowning wave pulling you up from the valley floor below to explore its many treasures. The crown jewel is Riqewihr which, with its three Michelin-starred restaurants and famous wine train, should be explored with an empty stomach and at a leisurely pace.

The town’s narrow cobble-stoned streets are lined with buildings dated from the mid-16th century to mid-17th century. As with many old towns the buildings seem to lean towards the street below in a way that feels as if they are trying to shield you from the sky. It reminds you that anything that humans construct is, in part, as alive as the beings who constructed it. Of course, the same can be said for wine, and Riquewihr has plenty of wine. 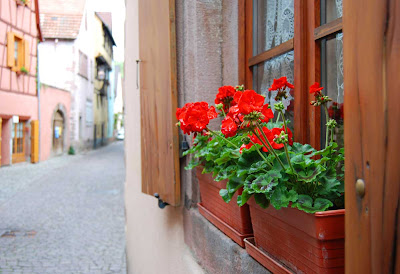 Being a prime tourist destination with a large tour-bus-only parking area, Riquewihr could be expected to have lost its once authentic charm, but that couldn’t be further from the truth. Sure, most small French villages can’t boast three Michelin-starred restaurants but the town has absorbed these tourist attractions so well that it seems as though they have always there. 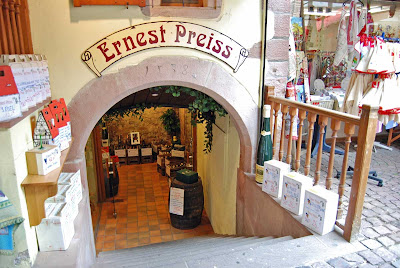 Many wine and wine-friendly-comestibles shops line the main street smack in the middle of the medieval fortified walled village. The shops have an extensive list of Alsace wines available along with wines from the other major French regions. The prices can vary from shop to shop so you are encouraged to visit many and compare. However, for the true wine enthusiast experience I suggest visiting one of the producers who have set up shop in the village. - LC