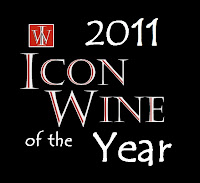 The Icon Wine of the Year is presented to "the best" wine released in the calendar year of 2011 that combines the following virtues: price, quality, pedigree, collectability, longevity and availability to the wine consuming public in Canada. The winner for 2011 is:


The "Icon Wine of the Year" selection was not an easy choice for 2011 with many top wines to choose from including the likes of Painted Rock's 2009 Red Icon, Blackwood Lane's 2007 Reference and Glaetzer's 2009 Amon Ra. All are exquisite wines worthy of the title and all scored higher points on IconScores.ca, but it was The Wrath which stood out, leaving a lasting impression of a memorable wine with a great story to tell.

The Wine
Intense, brooding and fantastically complex. This single vineyard Cabernet Sauvignon flies in the face of conventional wisdom which suggests that the thick skinned Bordeaux variety can't be properly ripened in BC. Fairview Cellars has had impressive success of ripening the grape year-in, year-out producing popular Cabernets and Cabernet-based blends but this one-off release sets a new standard for a cool climate Cabernet Sauvignon in BC.

The fruit for this 100% Cabernet Sauvignon wine comes from a Golden Mile Bench property that winegrower and winemaker Bill Eggert has been cultivating for 5 years. The name is a nod to "The Grapes of Wrath" and the hardship it suggests in getting the new vineyard site to the point where it would produce quality fruit (or any fruit at all for that matter). It could also refer to the wrath of God due to the seemingly spiteful nature of Bill's run of bad-luck with the site (feasting dear and wrathful hail). 2009 produced the first serviceable crop from the site and the timing couldn't have been better. The combination of the hot season and the vineyard site has produced the ripest Cabernet Sauvignon I have ever tasted in BC.

"Serendipity" may have been a legitimate alternate name for the wine as the hail storm that nearly wiped out the vineyard's fruit managed to have a positive effect on the finished product leaving a highly concentrated crop which contributed to the ripeness.

The Story
The clever label pays homage to a popular version of the front cover of John Steinbeck's classic novel about one family's Depression-era struggle for survival. The fight that Eggert waged against the elements and local wildlife pales in comparison to the tribulations of the fictional Joad family on the road to California to seek out a better life but the counter-culture, challenge the status-quo themes of the book are attributable, if only in a nudging way.

Some say that Cabernet Sauvignon shouldn't be grown in BC and that it should be grafted over to the more trendy Syrah grape. Bill's answer to this challenge is an ultra-ripe Cab with a release price of $65 - can't get much more counter-culture than that.
- Liam Carrier ©copyright 2011 IconWines.ca