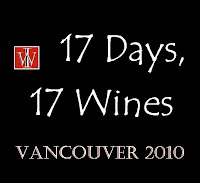 Icon Wines' self-proclaimed Olympics-junkie, Liam Carrier, offers his suggestions for each day of the spectacle that will be the 2010 Winter Olympics in his home town of Vancouver, BC. Celebrate the 17 days of the games with us as we salute a different BC wine each day.

Day 2 - Competition Begins
Canada has the awful distinction of being the only Olympic host nation to have never won a gold medal at home. Everyone expects this time to be different. I will go one step further and say that we get that rather large monkey off our collective shoulders on the first day of competition in the Ladie's Moguls. To pair with the lovely Jennifer Heil I suggest the charming and sexy Township 7 2006 Merlot.

Day 3 - February 14th
For Valentine's Day I recommend our top rated Gewurztraminer from 2009, Lake Breeze 2008, for all its fragrant perfume notes. A very sensual wine.

Day 4 - Dude, Where's My Snowboard?
The day's schedule is heavy on snowboarding so how about a "gnarly" BC red: Tinhorn Creek 2007 Cabernet Franc. Aromas of pungent cheese and cigar box will keep you entertained for hours while the wine changes in the glass.

Day 5 - Hurry Hard!
The curling tournament starts on Day 5. This sport has the occasional moment of adrenalin-pumping excitement when a player must make a clutch shot to save "the end" which brings the loyal curling fans to their feet. Mostly, however, it's a game of patience and precision which pairs well with a wine that you should probably be patient with and cellar for another 2-3 years before opening. But... the Olympics will likely never be back to Vancouver, so treat yourself with a bottle of Mission Hill's 2006 Oculus or find a bottle of the nearly-ready '04 (skip the '05).

Day 6 - Loaded
The sixth day of competition is extremely busy with events occuring everywhere, seemingly. This calls for a complex red that will develope in the glass as you change channels back and forth from event to event (sadly, if you actually have tickets, you won't be able to take this wine with you to the venue). I recommend the Poplar Grove 2006 The Legacy, a wonderful Bordeaux-style blend from Naramata.

Day 7 - Biathlon
Two Biathlon gold medals will be handed out on Day 7 up at Whistler Olympic Park and since I find this sport a little mad, I must recommend Fairview Cellar's 2007 Madcap Red. Fairview is an Oliver, BC winery that produces fantastic red wines under the watch of the "Madcap winemaker" Bill Eggert, a title bestowed upon him by a notable Vancouver critic.

Day 8 - Skeleton In The Closet
Skeleton is in an insane sport. To run as fast as you can for 20 paces and then launch yourself down a wicked and winding track of ice, head first. That takes guts. It takes another form of bravery to take a successful winery's image and completely change it for the betterment of the local appellation. Rebranding and starting the quest for name recognition all over. The winery in question is Road 13 who were once Golden Mile Cellars located on Southern Okanagan's Golden Mile Bench. We salute thee and your wonderful Road 13 2008 Honest John's White. Although traveling at 100mph down a mountain, head first, takes the cake.

Go to Part 2 - Days 9 Through 17
Email ThisBlogThis!Share to TwitterShare to FacebookShare to Pinterest
Labels: 2010 Olympics, BC Wine, LC