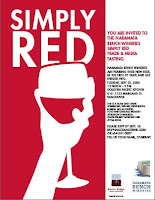 On September 22nd, Icon Wines had the privilege of attending the Naramata Bench Wineries Association's "Simply Red" event held at the fabulous Goldfish Pacific Kitchen in Vancouver, BC. Many fantastic producers were at the event and most had at least one new release to show off.


Located in the Yaletown area of downtown Vancouver, Goldfish Pacific Kitchen restaurant is a great venue for this short of industry event. The floor was opened up to allow easy access to the winery tables and the staff were very courteous to all in attendance. The food was first rate. A very well organized event that allowed the wines to take center stage.

Our palates were in heaven tasting the many new releases on hand but, unfortunately, they got tired before we could complete the full circuit and visit every winery table.

La Frenz Winery
Winemaker Jeff Martin was on hand to help pour all of the La Frenz current and new releases. New (and recent) releases include their 2006 Reserve, 2007 Shiraz and their 2007 Merlot.

Poplar Grove Winery
Icon Wines got to finally meet the winemaker/proprietor Ian Sutherland who was on hand to show off the release of their 2006 Merlot and Cabernet Franc as well as their new wine boxes for second lable Monster Vineyards products.

Laughing Stock Vineyards
Proprietors Dave and Cynthia Enns were on hand to pour their soon to be released 2007 Portfolio and their second-lable red blend, 2007 Blind Trust Red . The Portfolio was presented in a three vintage vertical (2005, 2006 and 2007).

Black Widow Winery
Black Widow only make one red wine and this was on hand: their 2007 Hourglass which is a Merlot/Cab blend.