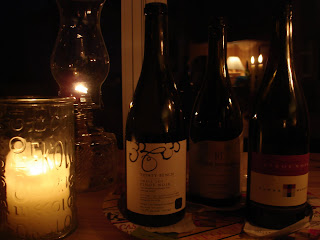 The showdown was a success. All judges took the tasting somewhat seriously and no one claimed to know exactly what they were doing which made it fun as we were able to learn together and find commonalities and differences in personal experiences. It was also good that the judges did not agree on everything and peoples preferences really guided the rating.

Judge 1: Distinct. Nose was caramel and subtle. Palate was dry with a smooth mouth feel. The finish had tight tannins and long. 8.5 out of 10.

Judge 2: Nose was subtle and distinct. Palate was very light and dry. The finish was spicy, peppery, and long. 7.5 out of 10.

Judge 3: Nose was pleasant. Palate was dry and light. Finish was excellent. 8 out of 10.

Judge 4: Nose was cherry. Palate was oak, with smoky tobacco. The finish was dull and dry. 5 out of 10.

Judge 1: Nose was chocolate, smoke, and strawberries. Palate was silky berries. The finish was tangy and long. 8.5 out of 10.

Judge 2: The nose was berries. The palate was fruity. The finish light and long. 9 out of 10.

Judge 3: The nose was sweet. The palate was fruity. The finish was sweet, tangy and long. 7 out of 10.

Judge 4: The nose was chocolate and strawberries. The palate was sweet and fruity. The finish was warm. 8 out of 10.

Judge 1: The nose was fruit forward and floral. The palate was smooth berries. The finish was spice pepper and short. 9 out of 10.

Judge 4: The nose was floral. The palate was smooth and fresh. The finish 8 out of 10.

So in the end wine number two was had the highest accumulated score and is the preferred Pinot Noir out of the three, however wine 3 was an extremely close second. 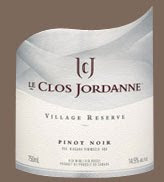 Drum roll please. The people's preferred Ontario Pinot Noir out of the three tasted is the 2007 Le Clos Jordanne Village Reserve. This wine scored well from all. It was the cheapest of the three tasted and has the highest production, however it is hard to get outside of Ontario (i.e I have never seen any of Le Clos Jordanne in BC). The most interesting thing is that the Village Reserve is the entry level Pinot of a flight of four. I can't imagine what Le Grand Clos is like. If the entry level is this good watch out for the others.

The runner-up for the Pinot Noir Showdown is the 2007 Tawse Pinot Noir. Personally I thought this was the best of the bunch, and except for one judge who scored it low, this would have been the preferred wine.

Last but certainly not least is the Thirty Bench Small Lot Pinot Noir. This was by far the most distinct of the three tasted and I think had a little more complexity than the others. It was not as fruit forward as the other two. An interesting note is that Pascal Marchand who helped consulted for Le Clos Jordanne was hired by Tawse for their Pinot's and this was evident looking back especially in the taste.

This experiment was an interesting test to find the people's preferred Ontario Pinot Noir out of three in relatively the same price range from similar appellations. For the most part the variables that could bias the results were accounted for and the results are fairly reliable. After completing the experiment there were a few things that I learned that were insightful that should be considered for similar showdowns in the future:

1) More judges would definitely add to the reliability of the results. The more people judging will lessen the impact of one or two outlier scores that might have skewed the results.

2) A better mix of judges. Although there was a reasonable cross section I think an equal number of educated wines drinkers compared to average drinkers would be beneficial and give a more representative indication of how the wine performs.

3) Average wine drinkers like tastes they can easily identify. The fruit forward wines tended to score better than the subtle and distinct one. This does not necessarily mean that the distinct wine is better however the wines that were fruitier were more liked by the judges.

In conclusion all the wines tasted in the showdown were excellent, however the Le Clos Jordanne came out on top. Overall this was a great experience to get insight into what people prefer and how to improve on future experiments. The 2009 Ahmic Lake Pinot Noir Showdown was a great success in market research and fun!! HC
Email ThisBlogThis!Share to TwitterShare to FacebookShare to Pinterest
Labels: Ahmic Lake, HC, Le Clos Jordanne, Ontario wine, Pinot Noir, Tawse, Thirty Bench