Much has been written recently about the "Cellared in Canada" issue, the unfortunate practice of a few Canadian wine producers importing bulk wine from other countries, bottling it in BC or Ontario and then passing the wine off to consumers as a local product with the complicit help of provincial liquor boards. We thought we would weigh in on the issue as well and help raise awareness in case there are any Canadian wine lovers or those that wanted to try Canadian wines who are not yet familiar with the practice.
The main issue, in our humble opinion, is the blatant deception at work. There is a place for budget import wines, but that place is not in the BC or Ontario wine sections of the liquor stores. We have been known to open a bottle of the easy drinking and affordable Copper Moon Cabernet Sauvignon for example, but we knew what we were opening. We fear that many people do not understand the difference, as all consumers are not complete wine geeks like we are at Icon Wines and read every word of the back label. These wines should be placed in a separate section and referred to as "Bulk Wine" or "Value Wine" as to not mislead the average wine consumer into thinking they are getting a Canadian grown and produced wine.
Even Wikipedia now has an entry on the subject (http://bit.ly/mveOX) which is curiously dated June, 2009 despite the fact that this practice has been going on for years. It is only recently, in the past three months or so, that the issue has gotten widespread attention and we believe this is, in part, due to the growing reputation of quality that BC and Ontario wines are attracting both at home and abroad. This could be the silver lining in the whole debacle. Canadians now care enough about their native wine industry that they don't want this reputation sullied by these impostors and are spreading the word on "Cellared in Canada". We don't think this public outcry would have taken place 5 years ago. 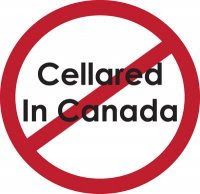 The logo from the "Boycott Cellared in Canada wines" Facebook page.

Tracking the issue online, articles on the subject started appearing early in the year, but it seems to have taken a couple foreign personalities to get the home front truly riled up. (Both internationally renowned Janice Robinson and the pro-business magazine "The Economist" have chimed in on the debate.) That's not meant as a criticism; it's very Canadian. Our own wine blog has been mum on the issue until now.

Icon Wines strives for independence and are not big on boycotts, but hitting companies (the large wine producers and the monopolistic liquor boards) where it hurts most, on the bottom line, seems the best way to get the seriousness of the issue across. The most disturbing part of this issue is that the large wine producers are basically saying "we don't care about our international reputation as long as we can make some money". I realize that these are businesses but can Canada afford to have their reputation tarnished when the industry is so young? Therefore, the partners of Icon Wines will pledge not to purchase any "Cellared in Canada" wines until these wines are mandated to be removed from the Canadian section in all liquor stores. We will research and name the guilty brands to avoid, but here's a hint: if you are considering a bottle of "Canadian" wine that is under $10, stop and read the back label. Chances are you will see "Cellared in Canada" in the fine print. - IW

Further reading on the subject: