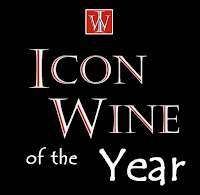 For the first time in our 10 year history we have a winery with back-to-back wins: congratulations to Black Hills Estate Winery for raising the bar with their small-lot, 2014 Cabernet Sauvignon!

In the past we have shied away from picking a small release wine to celebrate as our Icon Wine of the Year as it can be too hard for readers to track a bottle down, but we just couldn't ignore this exceptional Cabernet. The fortunate few who got their hands on it have liquid gold in their cellar, those lucky ducks!

Sadly this beauty was limited to the Black Hills wine club only, and I may have never encountered a better reason to join such a club thanks to its out-of-this-world depth, rarely seen in a BC Cab. Both sensual and powerful on the nose with deep, minty dark chocolate, intense cassis liqueur, tangy cordial cherry and dusty nutmeg aromas.
The ultra fine tannin palate is equally intense and layered with similar flavours of menthol, cocoa, cassis, kirsch and spice. The long, long finish offers additional notes of vanilla, toasted oak and sweet, blackberry acidity. Truly divine.