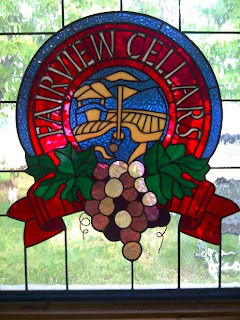 Bill Eggert, proprietor and winemaker of Oliver's Fairview Cellars, has his eye on the future. Expansion, vintage bashing and eventual retirement are all on his radar. Now before any Fairview faithful go nuts, let me reassure you that Eggert hasn't indicated that he's retiring anytime soon. Not to worry, BC's "Mad Cap" winemaker will be creating your beloved blends and manning his tasting room for the foreseeable future. But everyone needs to plan ahead.

The Word Du Jour
'Expansion'. The portfolio of wines, the underground lair, er, cellar and the winery's yearly case production are all expanding over the next few years. 2013 saw Fairview add a new working cellar/cave that tripled the winery's functional, climate controlled working area. The new construction will be topped by a patio and commercial kitchen that will overlook the winery's beautifully situated vineyard which overlooks the Fairview Mountain Golf Course and has a great view of the Southern Okanagan Valley. Keep an eye out for future winery events that will take full advantage of the gorgeous vistas and provide you the chance to sip the Fairview's flagship wine, The Bear, beside the very vineyard the grapes used in this outstanding blend are sourced from.

A third underground cellar is planned on an adjacent lot, the potential future site of Eggert's retirement house, expected to store the winery's finished wines which may help put Fairview in a position to extend the length of time before wines are released to the public - a long-term vision designed to improve overall quality and drinkability upon release.

At First Sip
The 2012 vintage is a beast - and there's lots of it. An expanded lineup may include (final decisions have yet to be made) two single-vineyard Pinots via the Eagle Bluff label and new vineyard designated varietal wines under the Fairview label.

The barrel samples tasted suggest robust Cabernets and blends whose beastly intensity and tannins will get a chance to mellow as the wines continue to age in barrel through 2013 with an expected release beginning in late 2014/early 2015. As well, one heck of a tasty Merlot was sampled (not usually a focal point of the Fairview portfolio) with loads of intense, dense berry fruit and spice which may be bottled as a unique one-off release a la Wrath - need I say more?

An Off Vintage?
Also tasted were the soon to be released Premier Series wines from the much maligned 2011 vintage; The Bear, Cabernet Sauvignon & a new 100% Syrah wine. The initial impression of these wines is very positive with the key question for all cool-climate 'Big Reds' answered: "Yes, they are ripe".

Much was learned from the equally cool 2010 vintage where fruit was dropped by the ton in reaction to colder than expected late-Summer conditions to ensure the remaining fruit ripened. Seeing similar weather conditions in 2011 develop, the decision for some wineries to drop fruit was made quicker and the result is actually greater tannin ripeness and bolder, more complex fruit intensity when compared to their 2010 counterparts. The Fairview Premier Series wines are a great example of this contrast where the 2011 line-up, on a whole, feel more complete than the 2010s.

If you're more of a taste-it-to-believe-it type then call up Bill Eggert for a tasting and he'll be pleased to show you that 2011 might not be the total write-off that some in the industry projected for the valley's 'Big Reds'.
- Liam Carrier ©copyright 2013 IconWines.ca
Email ThisBlogThis!Share to TwitterShare to FacebookShare to Pinterest
Labels: Fairview Cellars