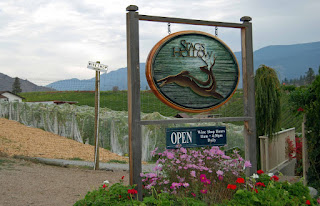 Okanagan Falls' Stag's Hollow Winery has recently released a new slate of wines for the Fall season, a mixture of white and red wines from the previous 3 vintages. The wines were presented at Lift Restaurant and Bar to media and trade with the wines already available on their website and soon to grace the menus of BC restaurants and wine shop shelves.

2011 Sauvignon Blanc - $19.99 (750ml) $427.00 (keg)
Both the bottle and Key Keg versions of this wine were poured for comparison. Both show major grassy characters while subtle, tropical fruit notes compliment the austere mineral elements. Not rated.

2011 GVM - $27.99
Unfortunately, this wine suffered from being served in an open-nosed, goblet-style restaurant glass which made the muted aromatics harder to perceive. First impression is that this vintage is not as stunning as the 2010, yet, remains an intriguing blend of 63% Grenache, 225 Viognier and 15% Marsanne. 2nd impression needed.
Full Review - coming soon


2010 Renaissance Pinot Noir - $35.00
Only the 3rd vintage of Pinot Noir over the past 10 years to be elevated to the winery's reserve tier Renaissance - very appropriate as 2010 has produced some amazing Pinot Noir in the Okanagan Valley. A great entry for the premium Pinot market with a complex, round nose of sweet red fruit and warm, earthy notes. Not a Pinot for the faint of heart! 90+pts
Full Review

2011 Renaissance Sauvignon Blanc - $24.99
Despite the 100% barrel fermentation in new oak with active lees stirring, the wine never feels heavy or overdone while the lees adds complexity in the form of sweet brioche notes on the nose. Citrus, crisp, steely with nice minerality on the finish. 89pts
Full Review

2011 Con-Fusion - $17.99
An off-dry blend of 46% Gewurztraminer, 35% Semillon, 8% Muscat, 7% Sauvignon Blanc, 3% Chardonnay and 1% Viognier which focuses on offering fruity-fun in a bottle. In the past, the Con-Fusion was a tad sweet for food pairing beyond spicy Asian food, but for 201 the unctuousness has been dialed back from "11" which will make it a nice companion to many more foods. 87pts

2010 Cabernet Franc - $27.99
This is a wine that stays with you and, upon reflection, was my favourite wine of the tasting. Builds nicely on the success of the 2009 with a turn towards more acidity for 2010 but remains effortlessly in balance. A great example of cool-climate Cabernet Franc with endless spice on the long finish. 90-91pts

2009 Heritage Block - $24.99
Stag's Hollow has moved towards an homage of Bordeaux's Right Bank for 2009 with a Merlot and Cab Franc heavy blend which delivers ripe blue fruit and berry aromas and flavours. An extra year in the bottle makes this wine stand-out from the winery's other new red wine releases - it is ready to go now and makes a competitive entry into the mid-tier, Bordeaux blend market in BC (think Fairview's Two Hoots and Osoyoos Larose's Petales). 89pts

2010 Cabernet Sauvignon - $27.99
This sku is always the one piece of the Stag's Hollow line-up that doesn't seem to quite fit. Cabernet Sauvignon is not a signature grape of Okanagan Falls (think "all things Pinot" as per winemaker Dwight Sick recently when discussing his view on what OK Falls should be known for) and the variety is notoriously hard to ripen in the Okanagan Valley with only a few vineyards consistently producing ripe, robust Cabernet grapes. The Stag's Hollow Cabernet makes the most of its cool climate pedigree with a well structured palate and nice, spicy/herbal elements but it fails to deliver the concentrated ripe dark fruit characters that we crave and may be best served as a blending component for its other wines. 87pts

2010 Syrah - $27.99
Pure white pepper delight on the nose and palate with more integrated tannins and a more subtle approach all-round than the powerhouse 2009; reflective of the cooler temperatures and longer growing season of 2010. 8.5% co-fermented Viognier adds depth and a feminine touch. 90pts