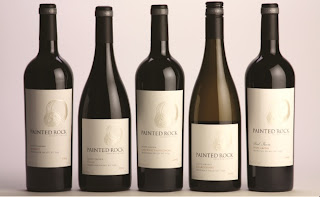 Momentum in the wine industry can be a tricky thing to gauge. New wines are generally released only twice a year in the Spring and/or Fall and to truly judge a winery's progress you have to evaluate multiple vintages of a product that may incubate for two or three years prior to its release. But every now and then a winery, winemaker or even a particular wine jolts from the industry peripheral into the mainstream, catching the attention of the public. Painted Rock Estate Winery, a favourite of restaurants and serious collectors since it opened in 2009, seems poised to take the next step towards  national recognition and familiarity with impressive results at the 2011 Wine Access Canadian Wine Awards.

The boutique sized winery achieved a perfect 100% accuracy with the 13 wines it entered scoring 13 medals including 3 gold medals. The results propelled the firm to the #3 spot on the magazine's list of the Top 25 Wineries of Canada. A truly amazing result as the Wine Access list is scored on the number of points achieved by each submission - a format that favours the larger wineries with a large portfolio of wines to select from.

To pull-off the feat, the winery, which only produces 5 wines each year, acted within the rules of the competition and submitted multiple vintages of its flagship Red Icon and other releases which can still be found on sale within the province. The practice may be hard for the winery to duplicate next year as the national exposure is sure to increase sales and, likely, wipe out the older vintages. However, proprietor John Skinner hinted recently that some more single varietal wines from the 2010 vintage may be in the cards for 2012 depending on what makes it into the final blend for their Bordeaux-inspired Red Icon.

The newly released wines are impressive and sure to, once again, be snapped up by BC's restaurants. To a hold of a few bottle for yourself or your collection, contact the winery direct (here) or keep an eye out for their arrival at your local VQA store.

2010 Chardonnay - $30
The best Chardonnay yet from Painted Rock is chalk full of character with a lovely, sensual balance of oak and sweet orchard fruit on the nose and palate.
Icon Score

2009 Merlot - $40
Despite the success (and relative higher scores) of most Bordeaux varietals from the hot 2009 Okanagan season, the Painted Rock Merlot doesn't manage to capture the intensity and charm of the 2008 vintage. Though, we're comparing a stellar wine with an above average one - nothing to complain about.

2009 Cabernet Sauvignon - $40
Delivers a dazzling display of complexity and depth. By far, the winery's best yet which is saying a lot considering the 2008 vintage won a Lieutenant Governor's Award of Excellent in 2010. This will be a hard wine to track down unless you order direct.
Icon Score

Note: The 2009 Syrah was not available for tasting at the Painted Rock release party.