In the position of president of the South Okanagan Wineries Association, or SOWA, you will find one of the most mature and grounded 25 year olds that you're likely ever to meet. Tim Martiniuk is the son of respected longtime grower Lanny Martiniuk and one half of the Tim and Jay Show when in the company of his winemaking twin brother. Tim is the public face of the family business that includes a boutique winery, vineyards and a nursery which he represents with the demeanor of someone who grew up in a family where children aren't coddled and are clearly encouraged to take on responsibility. It's a testament to his ability and passion for the industry that his peers have voted him to represent the interests of the association's wide range of members that include small family firms like the Martiniuk's Stoneboat Vineyards and large conglomerate-owned wineries like Jackson-Triggs Okanagan Estate.

The goal of SOWA is to promote the area's wine industry beyond simplistic non-SOWA efforts such as erecting a sign that claims Oliver as the "Wine Capital of Canada". The new message, as unveiled by the young SOWA president at the recent media diner of the 2011 Banee Wine Festival, is one of a sense of place - the uniqueness of the region's desert climate, which enjoys the most sun exposure in any of BC's grape-growing regions, and the diversity within the region as represented by the three benches: the Golden Mile, the Black Sage and the Osoyoos Lake benches.

The plan is to distinguish the region within BC with the help of some new branding material (colourful new logos and wine routes) and with the use of the new "Oliver Osoyoos Wine Country" moniker to promote a geographical identity. The message is solid, now the work to execute the vision begins. 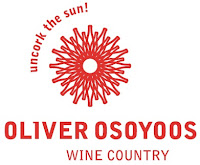 The reality is that membership in the SOWA is voluntary and currently excludes some influential wineries. Recruiting new and former member wineries will go a long way to ensure the message stays on point and has a consistent delivery. The push for a geographical identify must also be represented in the product. Many south Okanagan wines are produced using fruit from more than one of the region's benches and this fact is not always communicated properly on the label. It could be argued that a wine's provenance is only of interest to few, but when climatic diversity is paramount to the uniqueness of a region, where the wine comes from becomes more than anecdotal. Tasting room comparisons between vineyard specific bottlings of the same varietal has been a success in Niagara where the practise is more commonplace. Terroir transmitting Cabernet Franc seems a likely candidate for the Oliver Osoyoos region, but acreage is low and ultra small-lot releases are not always economically viable.

Tim Martinuik has his work cut out for him. He will be wise to foster co-operation and a true partnership between the family-run wineries and the large corporate wineries as it will be essential to the success of the region as a whole. In today's tough economy a home-grown industry has one small advantage that associations like SOWA can leverage; many BC (and Alberta) families will be looking for more vacation options at home in Canada over the next few years rather than traveling abroad. Partnering with local hospitality businesses and city councils to make it easier for families to choose the staycation option is a likely next step. Perhaps changing the sign in Oliver to read "Wine Touring Capital of Canada" would be a good start.
- Liam Carrier ©copyright 2011 IconWines.ca