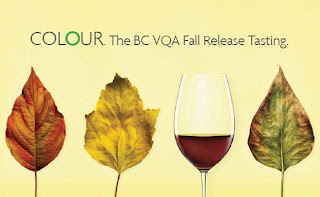 On September 23rd, 2010 the BC Wine Institute held its Fall Preview trade tasting at the new Vancouver Convention Center offering 100's of wine directors, servers, wine shop owners, media and "LB Wine Advocates" a glipse at new releases and a review of the current wines on offer. The later group being the folks from your local BC Signature Liquor Stores who were hopefully charmed by the many excellent wines on offer and will order more into their stores.
Keeping in mind too many wineries (over 60) in too little time, below are the notes for the wineries I visited with. Follow the links for the full review of select wines. (arranged alphabetically)
Black Hills Estate Winery
No new releases, however, Glenn Fawcett, winery president, was pouring their excellent 2008 Note Bene in double magnum format - what a treat. Wines bottled in large format tend to stay fresher as they age slower (less oxygen contact). For the 2008 vintage, it's the closest thing to tasting right out of the barrel. Any chance you get to attend a large format tasting, take it!
I also re-tasted their fabulous 2009 Viognier and liked it as much as the first time. A great first vintage.
Fairview Cellars
No new releases (yet). I re-tasted Bill Eggert's fabulous 2009 Sauvignon Blanc which remains one of my favourites of the year. Look for the new vintage of his Meritage blends "The Bear" and "Madcap Red" later in the fall. Fairview's current releases:
2007 The Bear - $35
2007 Madcap Red - $27
LaStella Winery
Released in October, the 2008 Fortissimo ($38, 14.2%) is a Super-Tuscan inspired blend of Merlot, Cabernet Sauvignon, Cabernet Franc and Sangiovese. A powerhouse of a wine that will be sure to please the LaStella faithful and attract new consumers to the Osoyoos based winery. Fantastic.
Nk'Mip Cellars
I focused on the two Qwam Qwmt reserve reds on offer with mixed results.
2007 QQ Syrah ($34.99, 14.2%) a lovely nosed and peppered palate wine. Creamy texture with good concentration of flavours.
2007 QQ Meritage ($29.99, 14.5%) a blend of 75% Merlot, 15% Cabernet Sauvignon and 10% Cabernet Franc which suffers from the dreaded under-ripe tannins that no amount of cellaring will correct. Has decent complexity but is overshadowed by other Meritage blends from the vintage.
Osoyoos LaRose

Unfortunately, viticulturist and winemaker Pascal Madevon wasn't pouring the upcoming release of Osoyoos LaRose which has been heavily built up by Vines Magazine. It should be released to the public on October 22nd - keep an eye out for it at your local BCLDB or VQA store.
If the "second wine", the 2007 Petales D'Osoyoos, is any indication (available now, $25) than the new Grande Vin may just live up to the hype. The 2007 is the best Petales yet with great concentration of aromas and flavours reflecting the warmer 2007 vintage. Amazingly, even the second label wine would benefit from another year in the bottle.
Go to Part 2
Email ThisBlogThis!Share to TwitterShare to FacebookShare to Pinterest
Labels: BC Wine, BC Wine Events