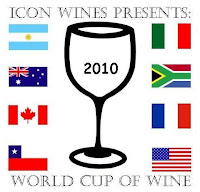 For Immediate Release - Icon Wines is proud to present the inaugural U20 World Cup of Wine. Eight countries will compete in the tournament in the following categories: Single-Varietal White, Single-Varietal Red, White-Blend, Red-Blend. All wines must be purchasable for $20 or under in the host city of Vancouver.

The participating countries are:

Pool A: Argentina, Australia, Canada and Italy
Pool B: Chile, France, the USA and South Africa

“The Finals” tournament, held through June 11th and July 11th 2010 in Vancouver, British Columbia, Canada will consist of round-robin play in Head-To-Head match-ups within the pools. The winners of each pool will cross-over to face the second-place finisher of the other pool. Then the round two winners will face-off for the 2010 World Cup on July 11th, 2010. - IW
Email ThisBlogThis!Share to TwitterShare to FacebookShare to Pinterest
Labels: Press Release, World Cup of Wine